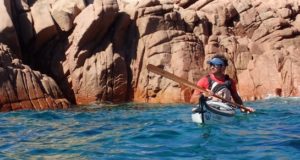 My name is Francesco, I was born and raised in Mercenasco where I took up kayaking at the age of 16.

In 1996 I moved to the birthplace of my father, Sardinia, and making the most of my experience over the years, in 2003 I managed to combine fun, love and passion for the sea with a professional opportunity by founding our association Cardedu Kayak

Cardedu Kayak is considered at the forefront of sea kayaking practice in the area of Ogliastra.

Subscriptions, opened in the spring of 2004, quickly surpassed all our expectations and by the end of 2007 we had about 50 people signed up. The competitive side took off in 2005 with our involvement in the first races at the regional level and later on our association achieved recognition when the Regional Championship came to Ogliastra for the first time. Further recognition was also gained from the organisation of tourist sea kayak trips, especially those of 2006 and 2007, which we hosted at the national level, supported by F.I.C.K.

From then on, my ambition has been to continue to enthusiastically provide new guided tours, courses and kayak hire always with the aim of promoting sustainable tourism which treats the environment with respect, with an awareness of nature and the marvellous sea around us using a unique means: the kayak.

I am also a Mountain Bike Guide at the National Mtb Academy. 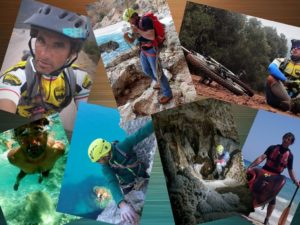